Coillte  consulted on its forest operational plans for Doughill property which surrounds the Sliabh Bawn Windfarm in Co. Roscommon.  The forest operations include clearfelling, thinning and replanting that are planned over a 5 year period from 2017 to 2021.

View the forest operational map which shows the felling proposals over the next 5 years: Overview map of Doughill

Stakeholders can also view the “Doughill Environmental Impact Report” in relation to these plans.

All stakeholders submitted their comments/queries If they wished to meet the local team to go through the maps in more detail, they requested this in the submission they send to us on the forest operational proposals as follows:

In addition Coillte  hosted a public consultation meeting which took place in the Percy French Hotel, Strokestown, Co. Roscommon on Wednesday, 18th January 2017 from 3pm to 7pm. Media adverts were placed in the local papers to notify stakeholders about this meeting.

Following receipt of consultation submissions, each were considered and responded to. If required the Coillte team would engage in further discussions with stakeholders in relation to their submissions. Coillte will then make changes as appropriate to its plans based on stakeholder feedback, and inform stakeholders.

Consultation on changes to proposals for felling 2016-2020

This consultation opportunity was held during October/November 2016. A listing below outlines Coillte forest properties where there were proposed changes to percentage areas planned for felling. These proposals were different from what was published last year during our 2015 Business Area Strategic Plan consultation process.

Stakeholders were able to view more detail,  and send their comments/queries on those felling proposals to Coillte’s team, using Coillte’s Web Map (see below)

Coillte’s interactive web map viewer displayed areas where proposed felling activity is scheduled to take place during 2016 – 2020, as outlined in our plans.

In the Map Viewer, stakeholders could send a snapshot of their area of interest, submit comments and suggestions on harvest blocks via an e-mail to Coillte’s team. The Coillte team if required engaged in further discussion and gave more details about the felling activity for that particular area in the snapshot. Coillte then incorporate feedback, make changes if appropriate to Coillte’s plans and inform stakeholders.

Stakeholders were given direction how to use the Web Map, see user guide. 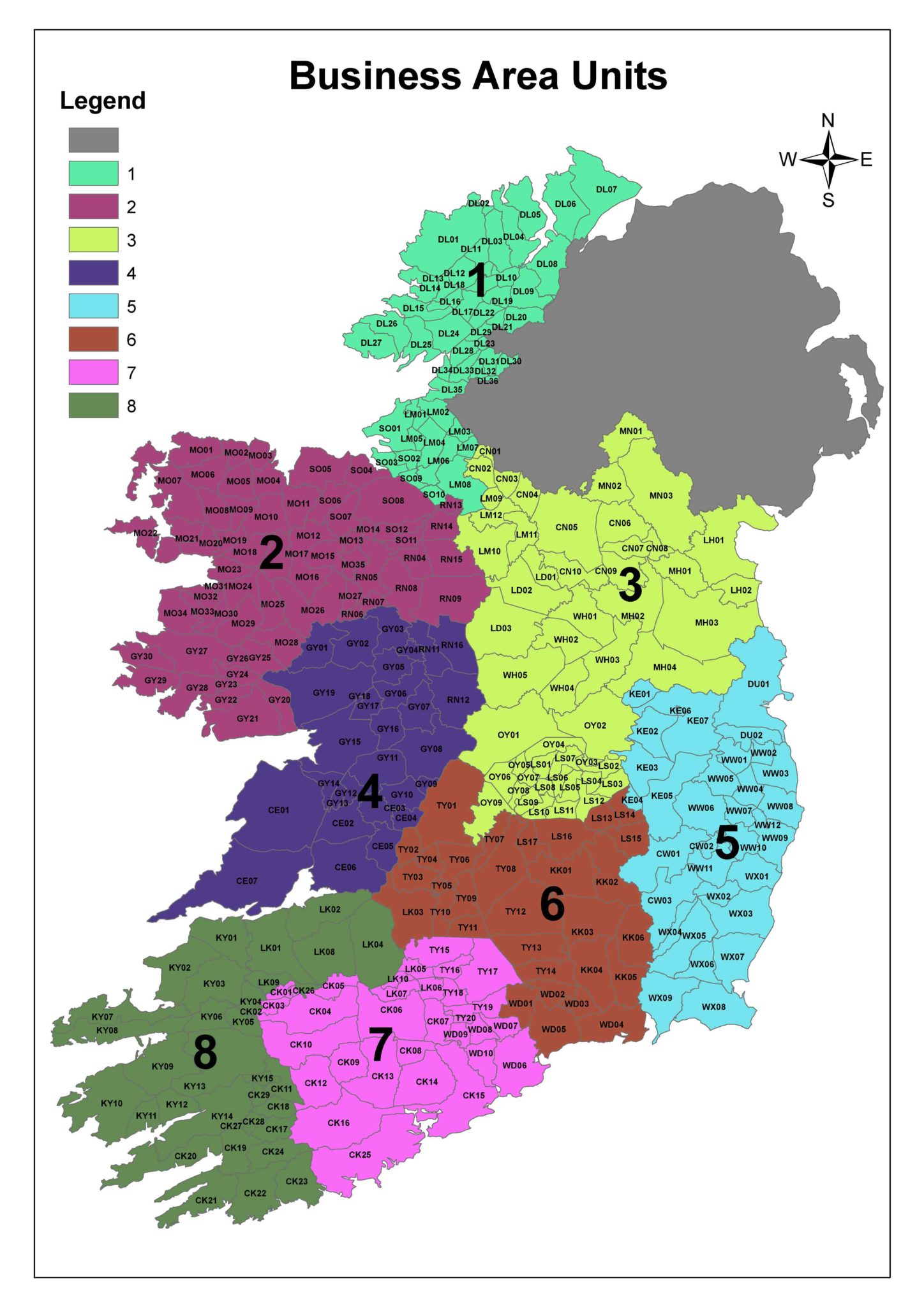 Coillte produced draft BAU strategic plans for the period 2016-2020 with the help of the public,  following a review of our plans during a public consultation process held during 2015.

Coillte's consultation process aimed  to focus on and consider the impacts of our plans on affected stakeholders. Views, input, feedback and submissions from the public were welcomed. The BAU strategic plans set out a vision for the forests in each business area unit, and also, how Coillte policies and objectives will be implemented during the period of the plan.

Stakeholders should be aware that during our public consultation processes, submissions may be available to others if Coillte are subject to disclosure under Access to Information on the Environment requests. Therefore submissions are not confidential.

The stages of this review were:

During stage 1 we asked stakeholders  for initial inputs into what they felt  should be incorporated into this BAU strategic plan review process. Submissions, comments, feedback from the public were sought.

Stage 2: Receipt of submissions, consideration and incorporation of input where possible

There was an enthusiastic response to our request for initial inputs during Stage 1. With this help Coillte produced new draft BAU plans. Submissions were considered and received a response. Stakeholders will be advised of any potential changes to our plans as a result of those submissions. Key themes identified can be viewed in our summary document on this page http://www.coillte.ie/coillteforest/plans/coillte_strategic_planning_and_long_term_vision/

During stage 3 we asked for submissions and comments in relation to the draft plans developed.

Stakeholders were asked to send their submissions by email to: consultation@coillte.ie or by post to BAU strategic plan consultation process, Coillte, Dublin Road, Newtownmountkennedy, Co. Wicklow.

Stage 4: Receipt of submissions, consideration and incorporation of input where possible into final version of plans

Coillte intend to finalise these plans by the end of March 2016, when its hoped we will have a decision from FSC about a derogation for use of Cypermethrin in our forests.

What is the consultation about?

Coillte (the Irish Forestry Board)  is facilitating a consultation on behalf of FSC forest management certificate holders in Ireland.

This consultation concerns proposals for renewing a derogation from the Forest Stewardship Council® (FSC) so as to permit the use of a pesticide (cypermethrin) which is legal to use in Ireland and registered for use in forestry by the Pesticide Registration and Control Division of the Department of Agriculture, Food and the Marine but is classed as ‘highly hazardous’ by FSC and so can only be used in FSC-certified woodlands if there are no practicable alternatives.

Certificate holders consider the continued use of cypermethrin to be necessary for the control of large pine weevil which has a major impact on the re-establishment of forests in Ireland and are submitting a derogation application to FSC as set out below:

Current status: derogated for use in Ireland by FSC until October 2015

How can I find out more?

Coillte’s application for derogation, including a demonstrated need for the product, specific controls to prevent and minimise use, non-pesticide management options and other control options may be found at the following link: Application for Cypermethrin Derogation

It is important to receive feedback from a full range of economic, environmental and social stakeholders and you are strongly encouraged to respond to this consultation process.

Your input will ensure that full account is taken of all the important issues.

The consultation period starts on Wednesday 20th May 2015

Please pass on this notice to anyone you think may have an interest in this matter.

Please send your consultation response to consultation@coillte.ie on or before 4th July 2015.

As the key holder to the nation’s forests and as a commercial forestry and forest products company, Coillte has to make the final decision as to the detailed operation of each of our forest sites. We manage the forest estate according to Responsible Forest Management (RFM) principles, as we seek to balance the Social, Economic and Environmental aspects of our business. In doing so, we wish to ensure local participation in the business area unit (BAU) and forest planning process. It enhances our understanding of how our decisions impact on all forest users and on our neighbours and also helps create a positive working environment for our staff and contractors.

Coillte’s operating structure of 13 Districts changed in late 2012, to 8 business area units(BAU). Resulting from this change, Coillte completed the reconfiguration of its  District Strategic Plans (DSPs) 2011-2015 to reflect these 8 new business area units. There were no changes to the forest management plan boundaries within these areas at the time. Coillte held a public consultation process for 5 weeks to allow input and feedback from our stakeholders and the public on these newly reconfigured plans. This consultation process took place during late February, March 2013. Coillte’s consultation process includes the following:

Stakeholders were made aware that consultation submissions made to us would be available to others and therefore are not confidential. All submissions were acknowledged and considered. In some cases Coillte endeavored to incorporate input into its plans where possible, however in some cases it was not possible to change its plans to reflect all submissions received. In these cases, Coillte attempt to explain the reasons to stakeholders.

Both of these management plan reviews were finalised after extensive public consultation opportunities with stakeholders and members of the public.  All had the opportunity to submit comments/views in relation to Coillte plans. Coillte’s consultation process includes the following:

During past public consultation opportunities, stakeholders highlighted key consultation topics and to view Coillte's response to some of these topics, view a summary of stakeholder consultation comments and our response