The prospect of leading on this project was very exciting and also somewhat daunting. Having visited the cutaway raised bogs on numerous occasions over the last 25 years or so armed me with the knowledge that native woodland is appropriate under specific circumstances as evidenced by the presence of native scrub, some at least 30 years of age.

These occur ‘above the waterline’ where it is not possible to restore raised bog or wetland habitats. However, to underestimate the challenge of achieving successful native woodland establishment by assisting natural regeneration through seeding and planting would be foolish. The cutaway bogs are generally harsh environments with sparse vegetation, very little shelter if any, and exposed to frequent dust storms as the loose peaty surface – along with most of the seed bank deposited the previous autumn – is picked up carried away in mini vortex- like tornadoes twisting away toward the horizon. 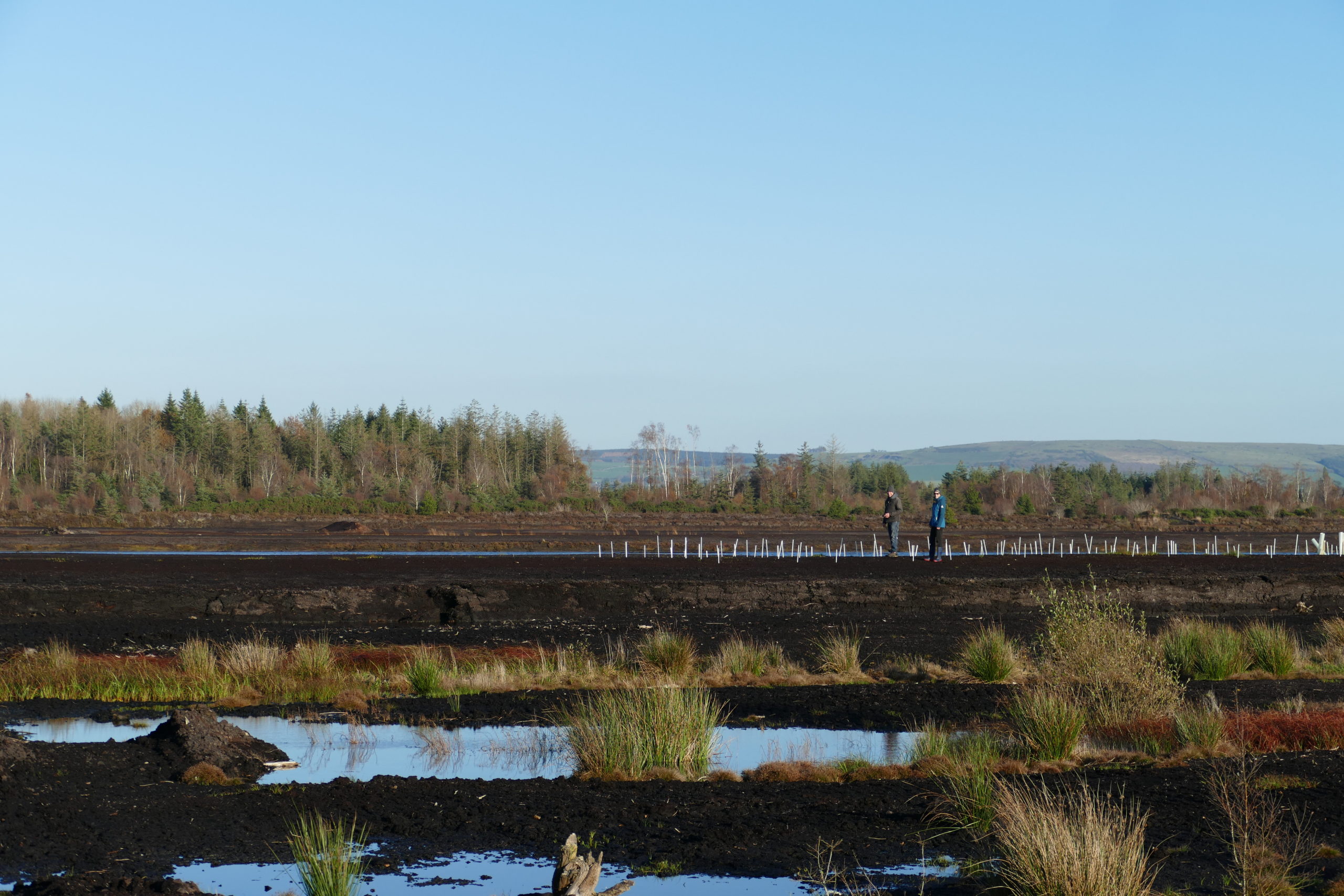 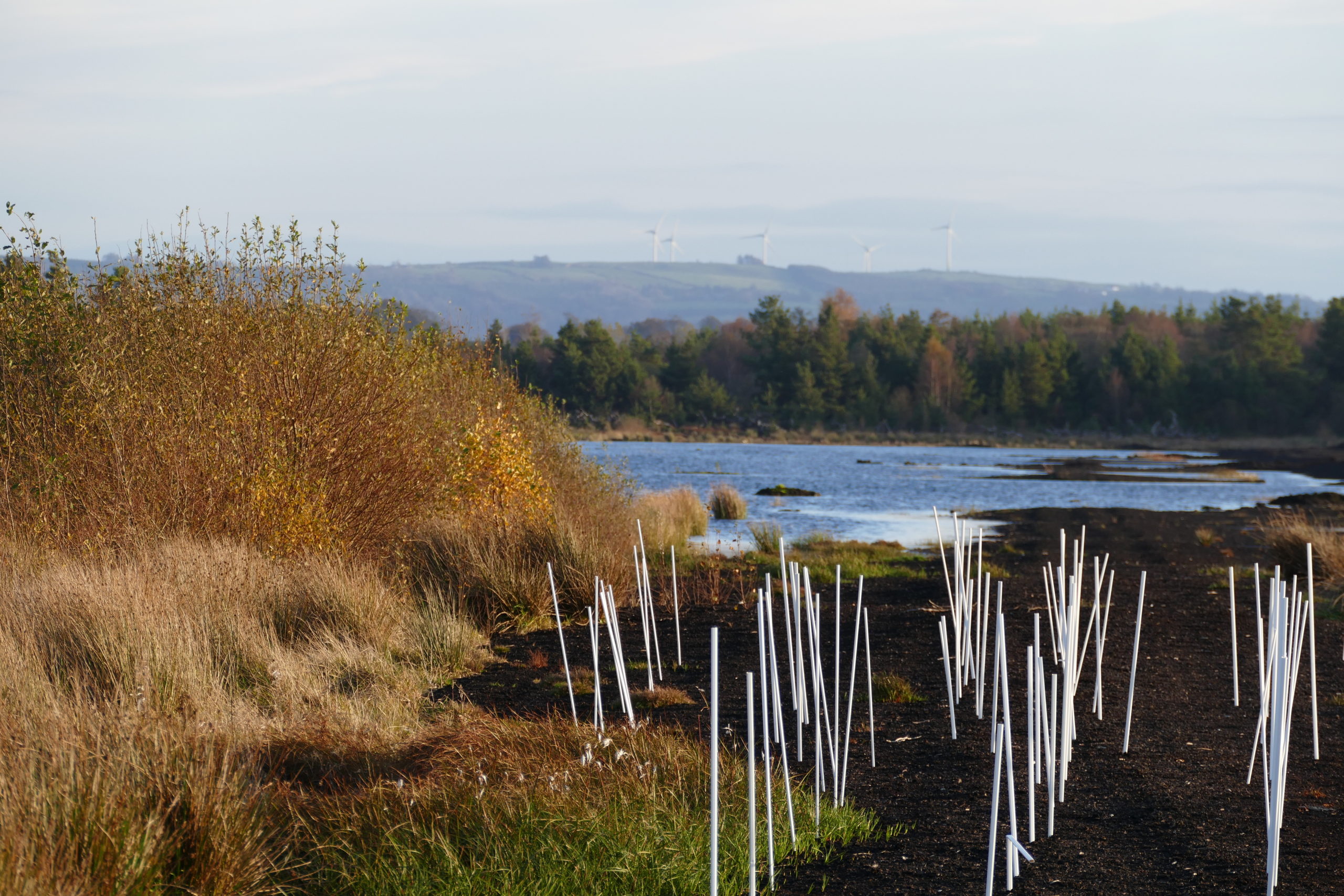 First, we got to work on the Environmental Impact Assessment

The first task was to co-ordinate the Environmental Impact Assessment (EIA) for this ambitious project located at the Littleton Bog complex on the Tipperary- Kilkenny border. At nearly 340 hectares, this would be the only the second EIA ever applied for in the forestry sector to date. In January, McCarthy, Keville, O’Sullivan were contracted to undertake this task with particular emphasis on the ecological, archaeological and water quality impacts. This enormous piece of work was supplemented with a Natura Impact Statement and delivered in mid-July.

Then we set up 100+ trials and engaged in consultation

As the EIA was in train, two other related tasks were addressed: the establishment of native woodland planting and seeding trials, and a consultation process to feed into both the EIA and the project itself. The trials were established based on previous research projects on forest establishment on cutaways here in Ireland and elsewhere in Northern Europe but the Coillte Nature team felt that it was vital to hear the views of all concerned on the viability of the proposed woodland establishment project and to harness the expertise available in designing the establishment methods. Researchers, practitioners and environmentalists were consulted online in late March (due to Covid restrictions), contributing to a very useful discussion. 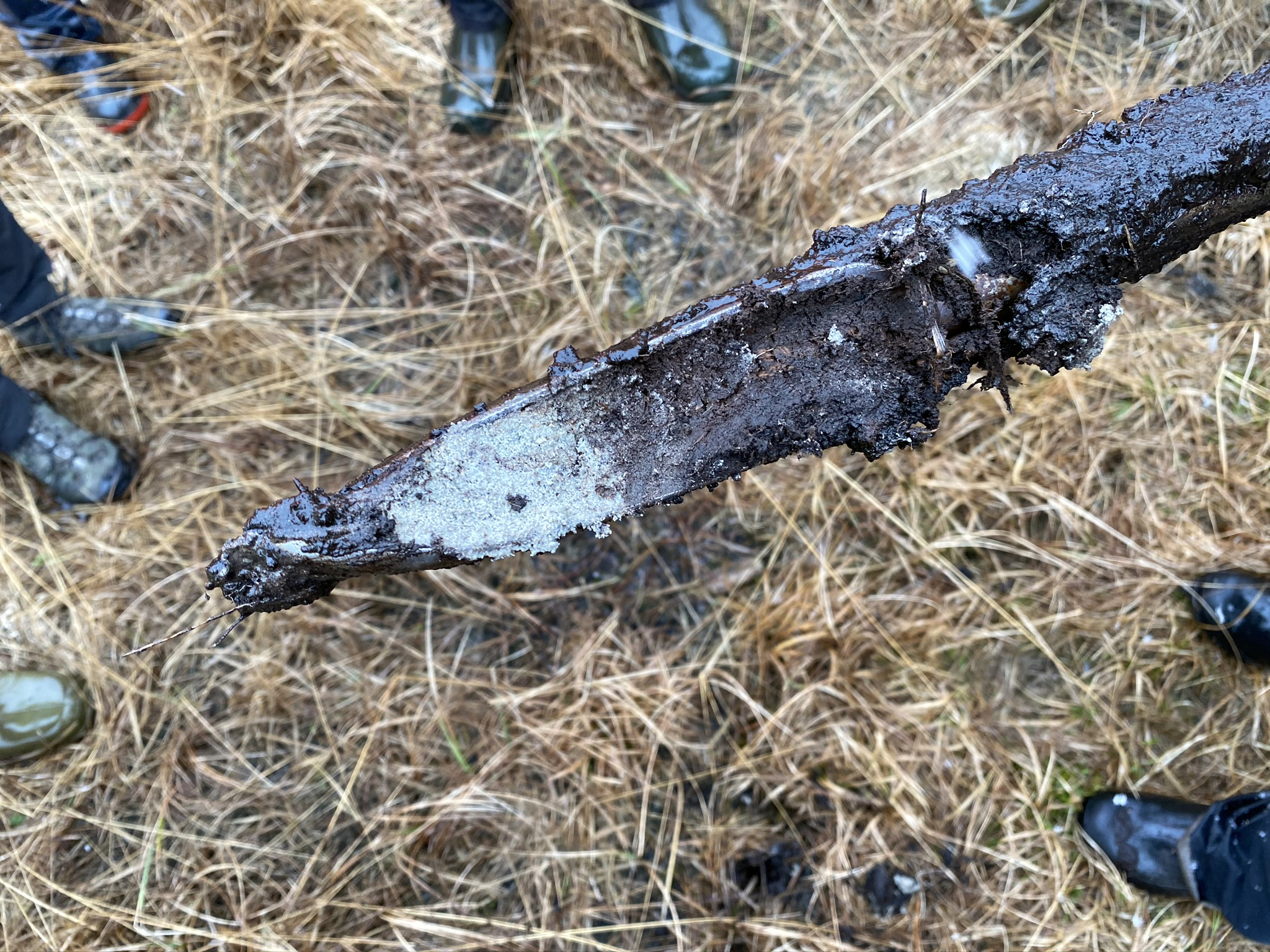 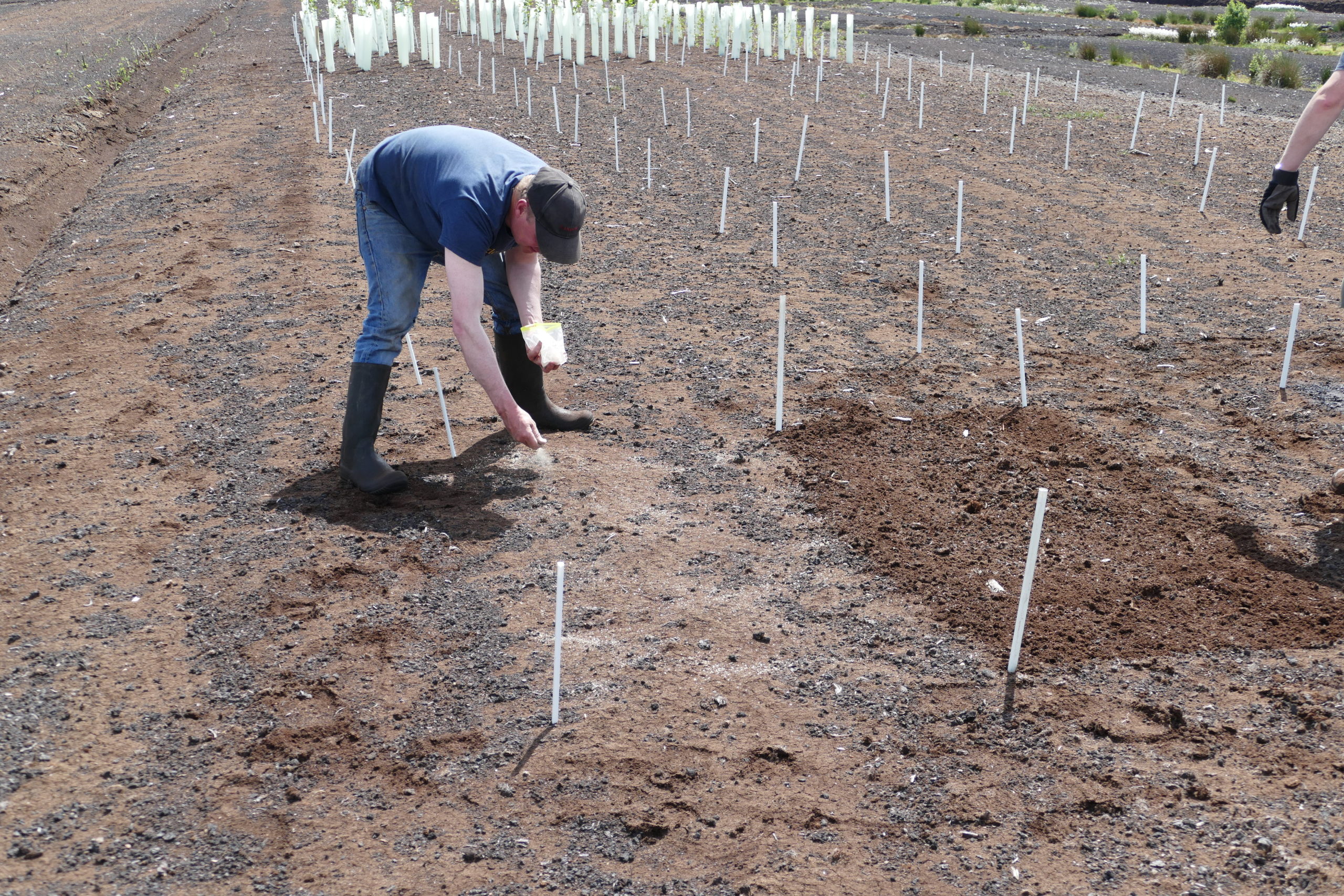 Meanwhile, March also saw the establishment of planting trials on three alternative scenarios at Baunmore Bog in the Littleton Bog complex. The weather early that month was a sharp reminder of the hostile environment we are working in: driving sleet and snow showers in a howling gale. Nonetheless, with the very considerable expertise and experience of staff at Coillte Nurseries and retired silvicultural expertise from Coillte Research, we managed to plant downy birch, alder, Scots pine, rowan and willow cuttings (cut from mature willow on the bog perimeter) on (1) deep peat (2) moderately deep peat, and (3) very shallow peat (over mineral outwash) with the help of planting contractors. The establishment rate was excellent at over 90%, while the willow cuttings did very well despite the attention they received from hares who relish the sweet sap beneath the bark.

A spring drought saw the team get busy with watering cans!

The Arctic-like weather of early March was followed by a spring drought. This forced us into watering the trial plots in May and early June until the weather finally broke mid- month. All hands to the pump resulted in the entire team carrying watering cans to and from adjacent bog drains to ensure the thirsty trees were adequately sated. The drought also delayed the planned spring seeding trials from April till late May, followed by frequent watering.

The first seedlings sprouted in July

Some of the planted and seeded plots were subsequently fertilised with half the commercial rate of phosphate and potash, as previous experience indicates that the trees will run out of nutrients and stop growing, eventually dying. There was considerable excitement and relief when the first of the seedlings appeared in July, Scots pine to begin with, followed by birch, alder and rowan.

Autumn seeding followed in November and though drought is unlikely to hamper germination (as occurs with increasing regularity in recent decades during spring), the challenges of winter gales and heavy rain will test the survival of these babes of the wood. In order to assess the various methods and replicates in these trials, two final year students from Waterford Institute of Technology braved the elements in November and December to measure growth rates, survival, ground vegetation development and community composition.

Early results are encouraging, but we remain cautious

If successful, this project will add to the mosaic of habitat development on the abandoned cutaways – especially wetlands, raised bog and wet heath - and help stabilise the bog surface, preventing unchecked wind and water erosion. However, though initial indications of both seeding and planting are very good, especially on moderately deep and shallow peat over mineral outwash trials, one swallow does not make a summer!

It will be a couple of years before we really know what works and what doesn’t. If we can mimic the naturally occurring predominantly birch, pine and willow woodlands that occur elsewhere on the cutaways, that will constitute success. 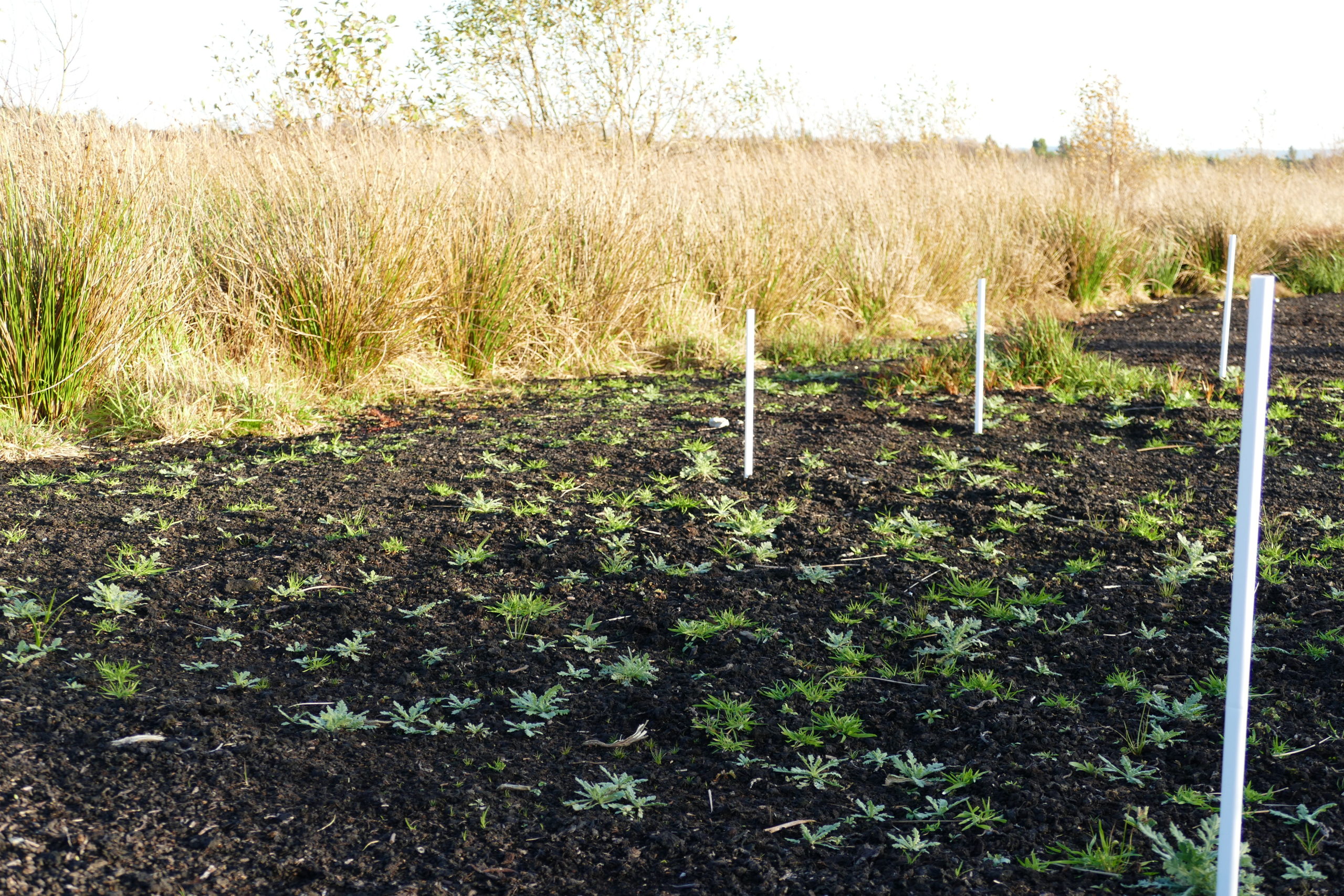 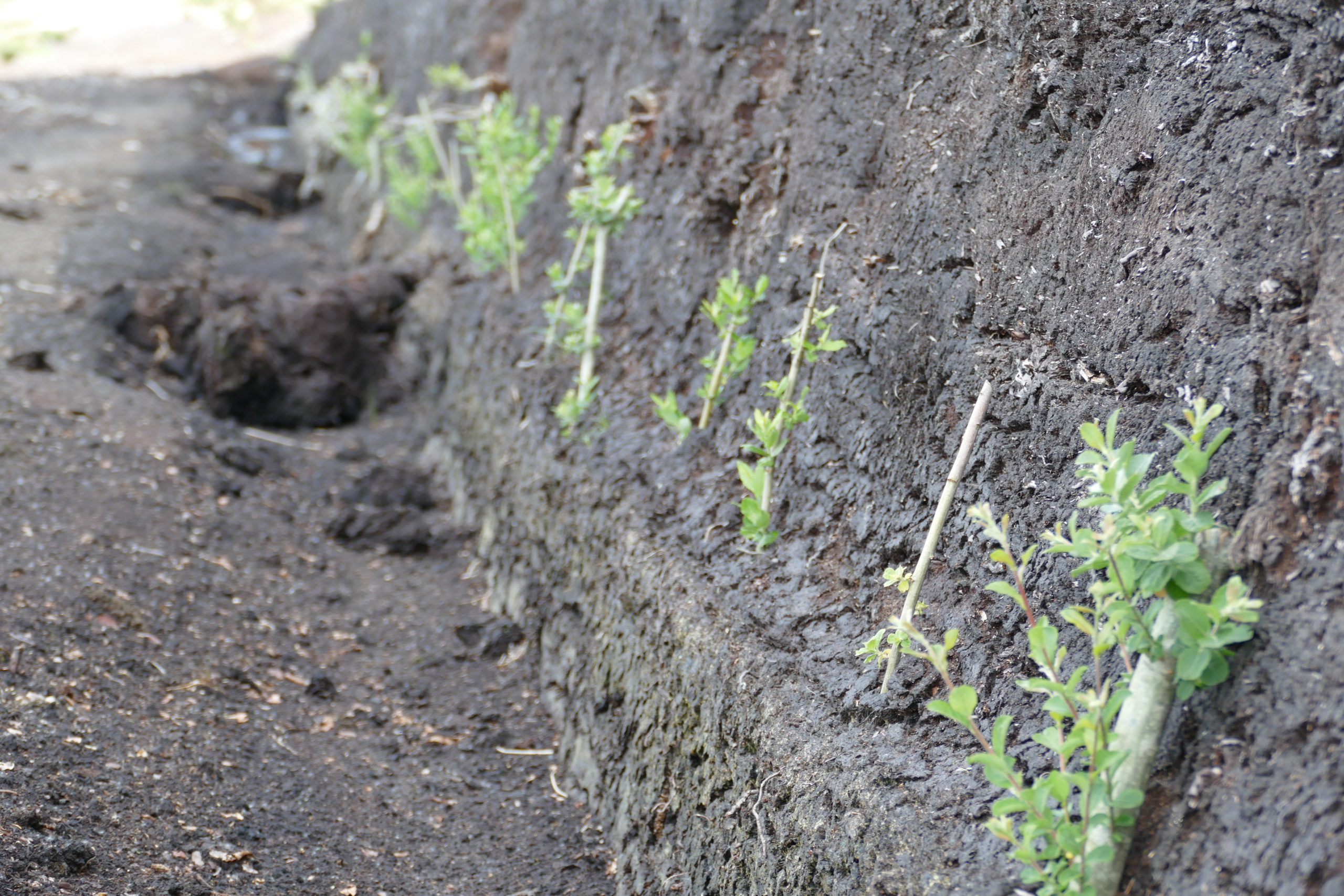 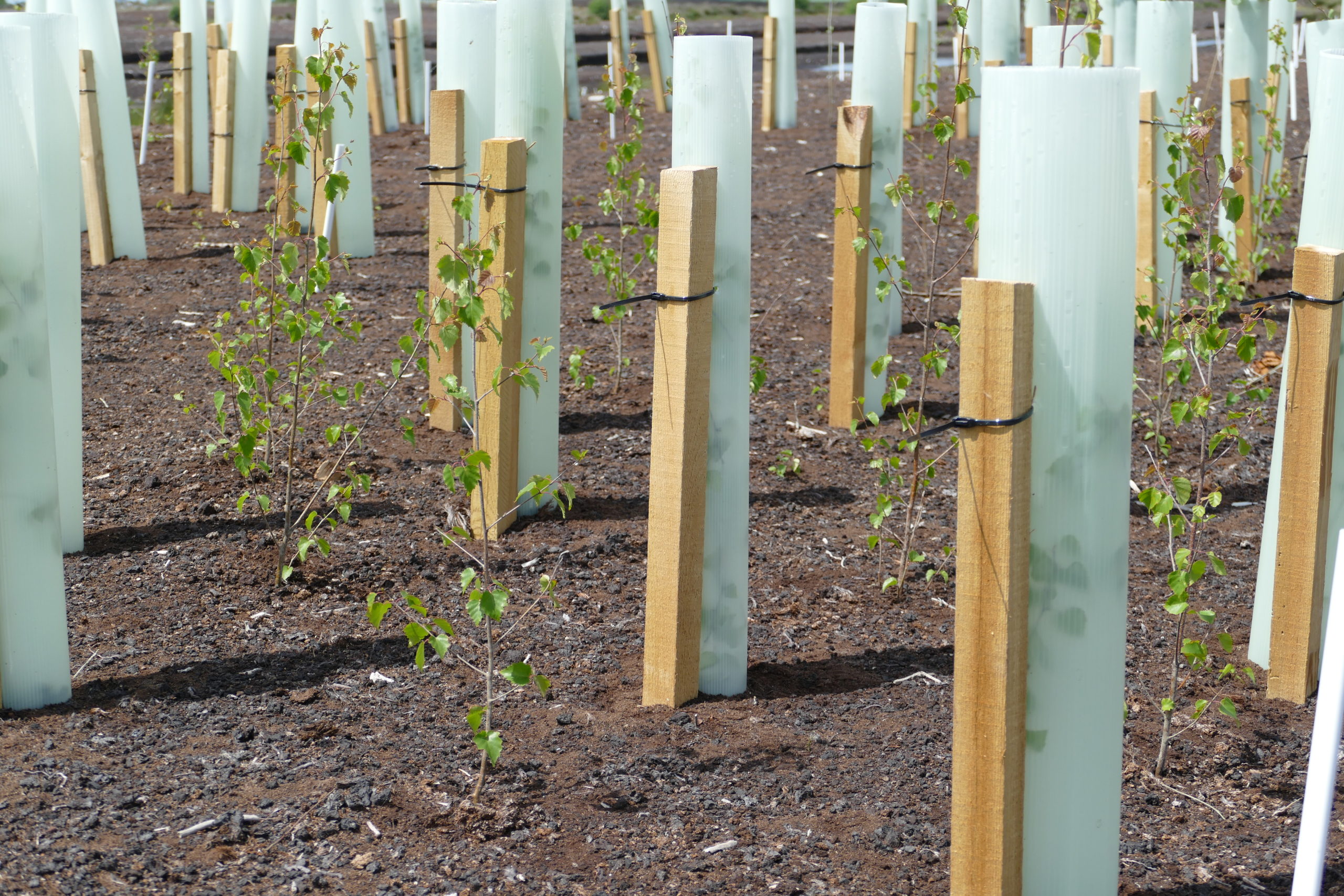 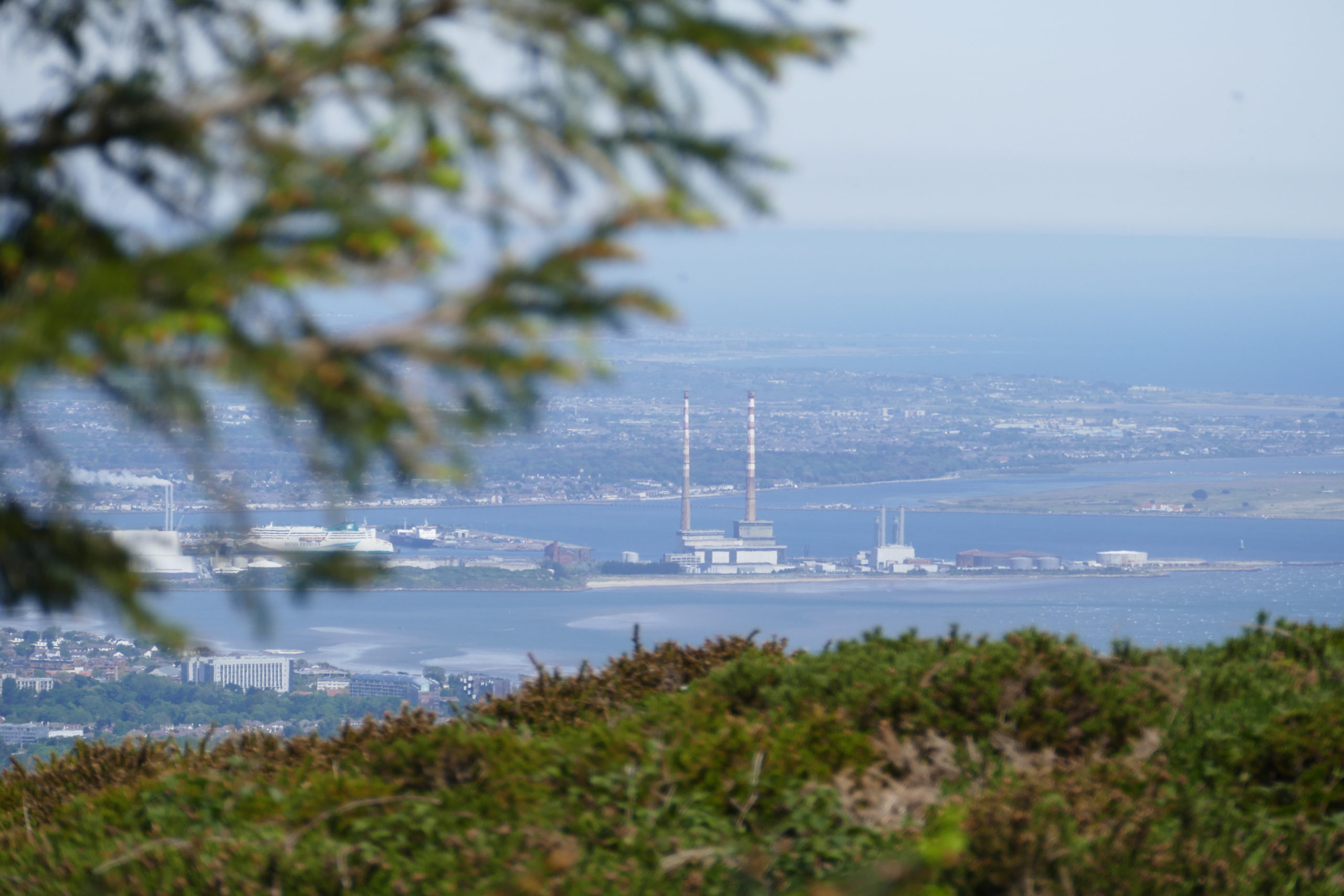 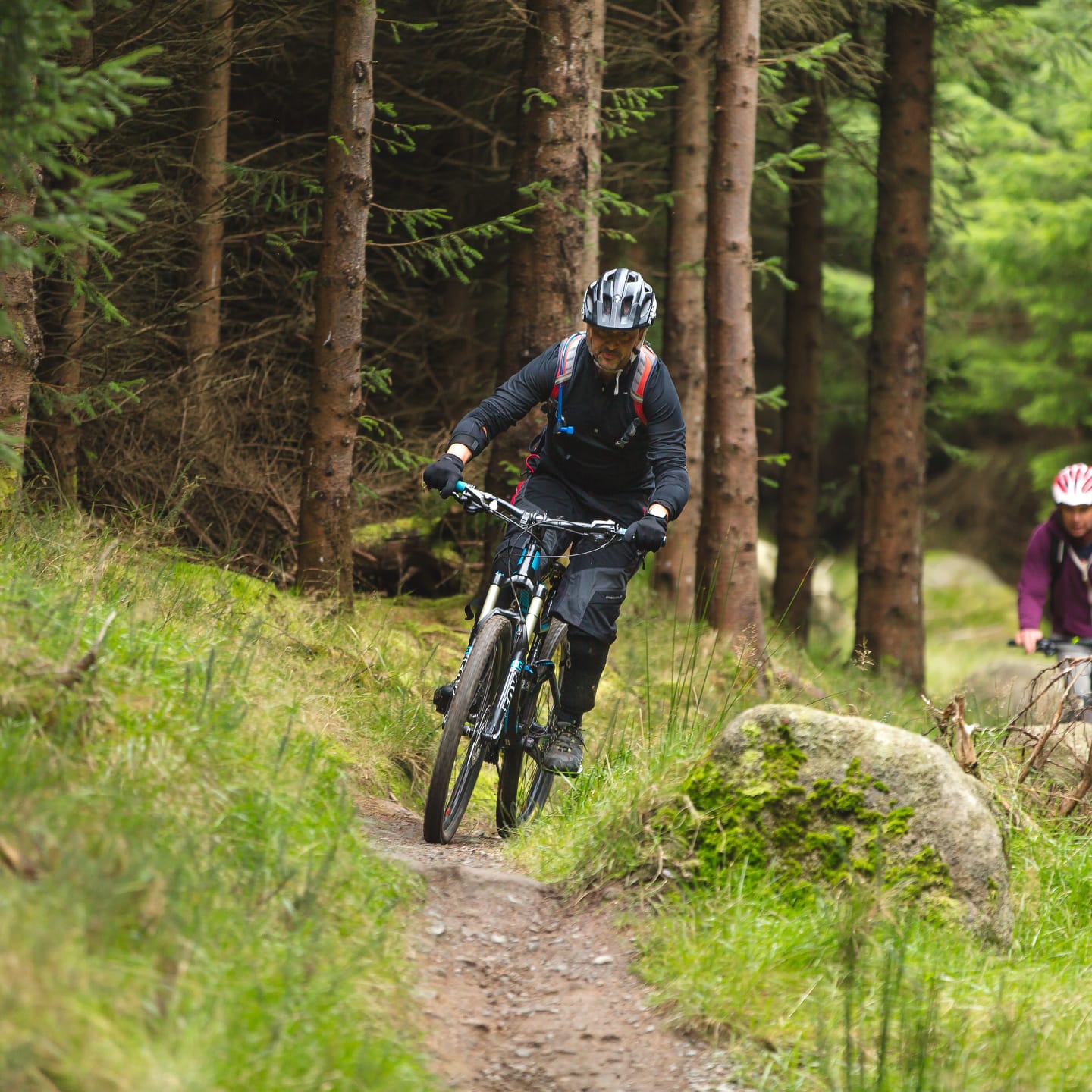 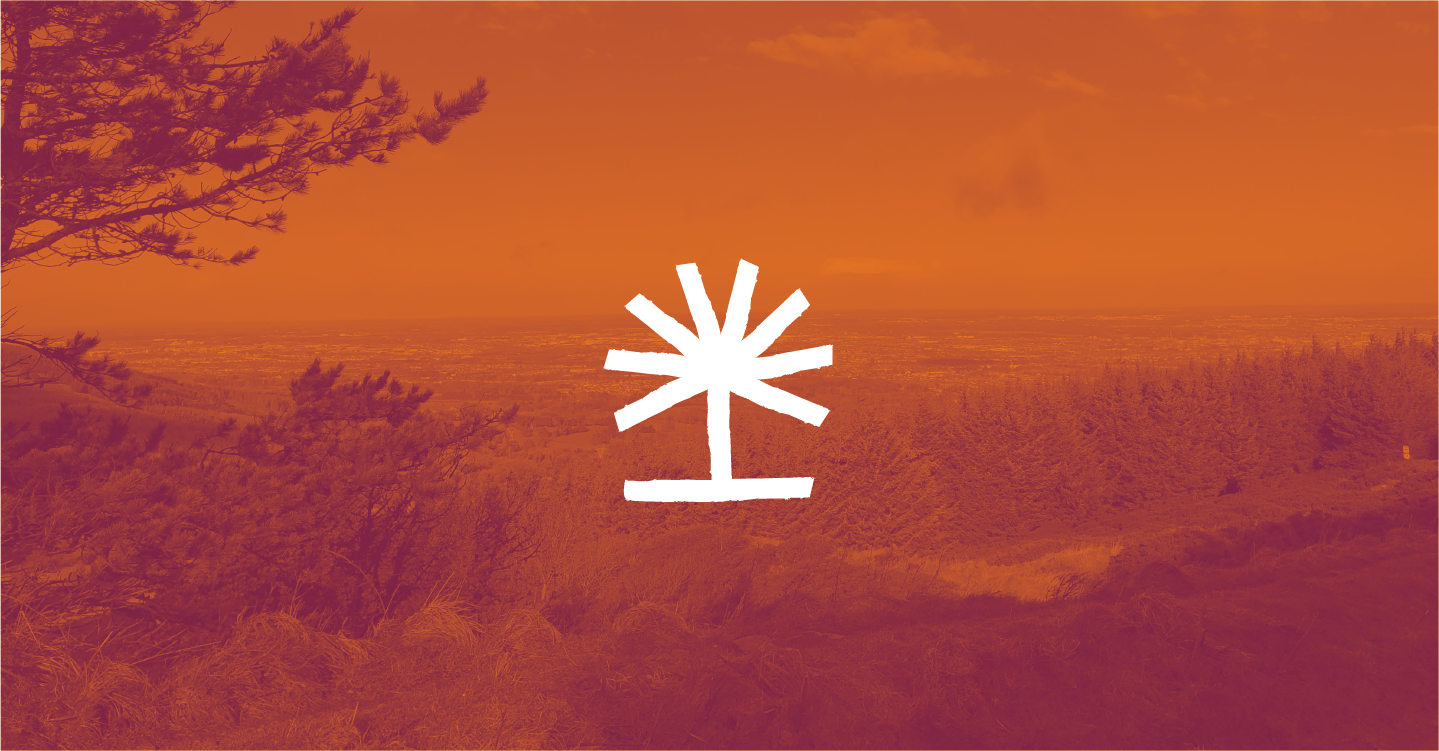